This game allows kids to see how multiplication is just a faster way to add. This simple game shows kids how to multiply beyond the times table and shows how grouping can help solve more complicated multiplication problems. The pretty gems just make it a whole lot more fun! 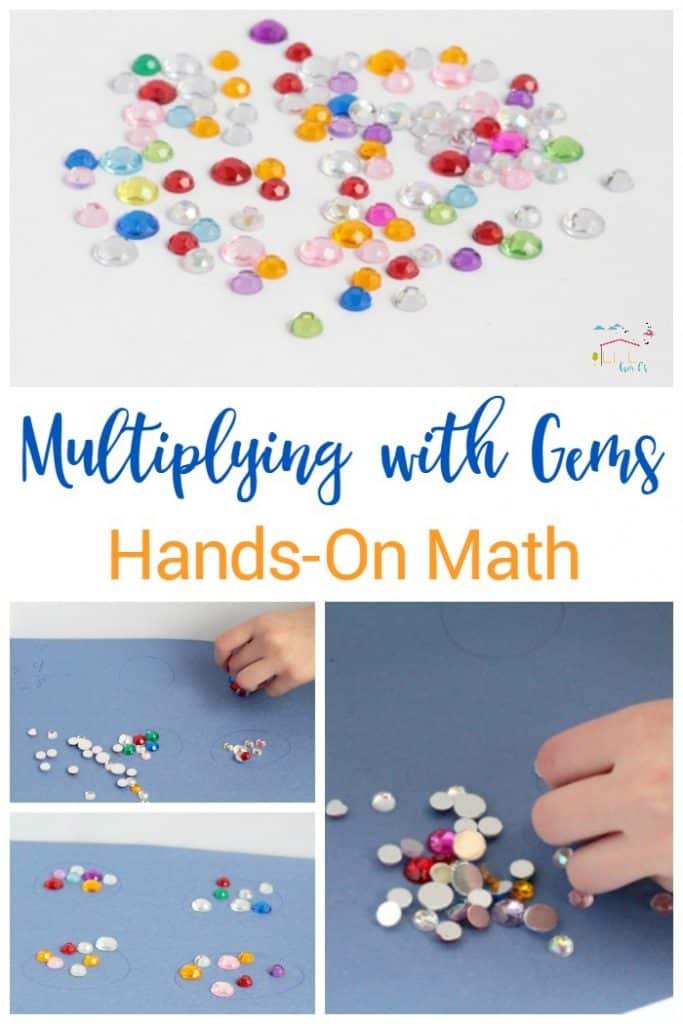 My daughter is pretty good at multiplying single digit numbers, but she still struggles with multiple digit multiplication. I came up with this gem multiplication game to help her see how grouping can be used to solve more complicated multiplication problems. The gems were perfect for this activity because the package we had included several hundred gems, which is perfect for hands-on multiplication challenges. 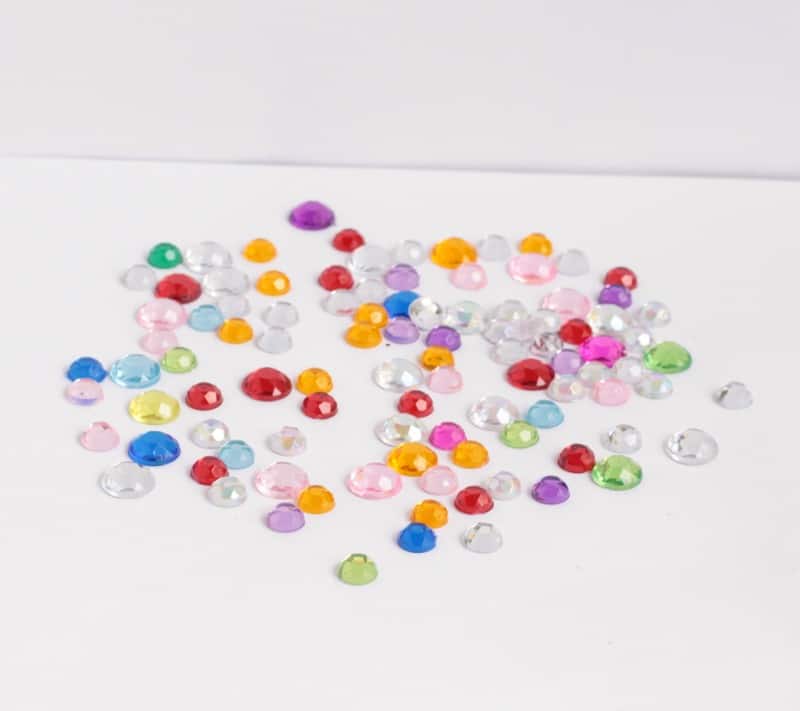 The set-up for this activity is simple.

I showed my daughter how a multiplication problem written out can also be transformed into a grouping problem. 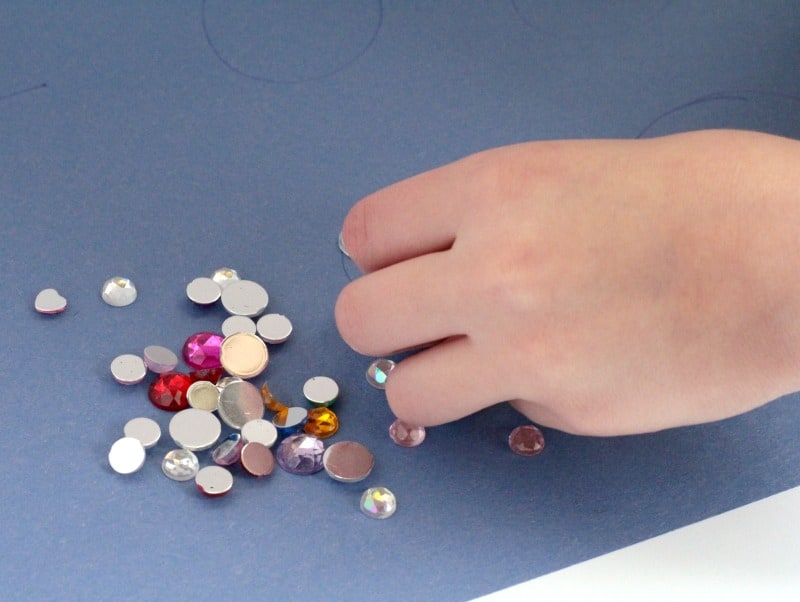 In our example, we’re solving 7X4, but previously, we also solved a bigger number. This game works for all kinds of problems.

We made four groups and put seven gems in each group. Then, I had my daughter count how many total gems there were.

I also showed her how she didn’t have to complete every group, which is how multiplication works. 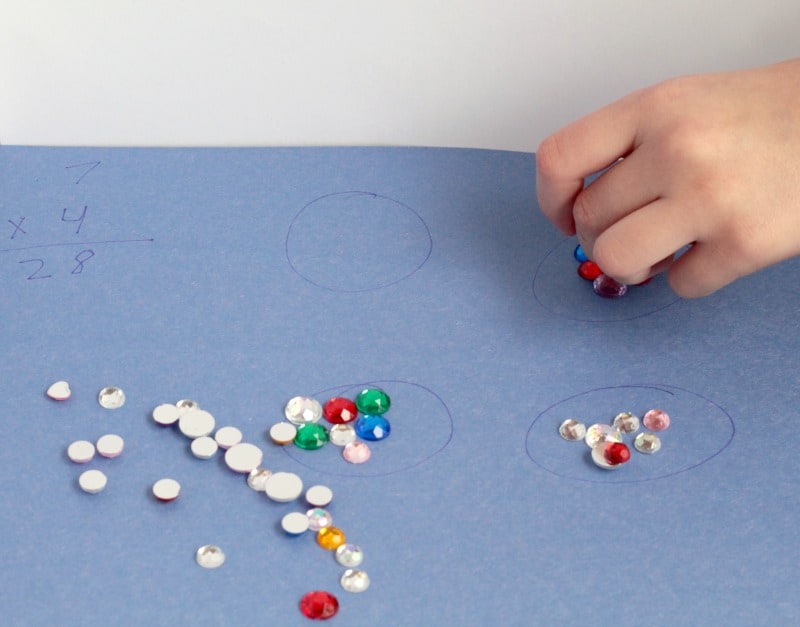 We did this for several numbers, and even for double-digit multiplication problems. 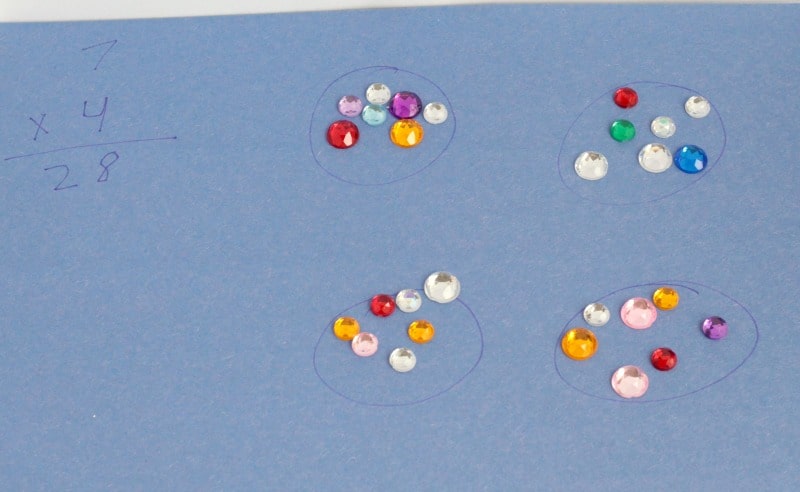 After we solved the multiplication problems the long way, I also had my daughter estimate the answers to multiplication after she got the hang of grouping.

She was able to make educated guesses that were pretty close to the actual answer.

If you wanted to make this more game-like, you could give points to the first person to correctly group and answer each problem, or give a point to the closest estimation to the real answer. Fall is here and all the farms around us are harvesting all their crops. Grain bins are filling up and trucks are moving out. It’s so fascinating to see. That’s why we brought the farm to our house to explore weight with our own set of crops. This activity is part sensory play and part math…

In the fall, we get a little acorn obsessed. One day, my kids gathered a whole bunch of acorns from an oak tree in our yard. We washed them off and dried them, but the kids were a little stumped on what to do with them. I thought for a few minutes about what we…

This fun pot of gold printable counting game helps children with number recognition, counting, writing numbers, and so much more. Roll and Count math games are one of my favorites because there is a the element of surprise. This is not only exciting but also makes it so kids can’t pick the ‘easy’ ones that they…

Are you exploring patterns or does your child love to make patterns? One of my daughter’s loves patterning so much that we are constantly working on growing patterns. Below you will find a list of all the pattern printables I have found and they are categorized by: NON THEMED, THEMED and SEASONAL. Non-Themed Pattern Printables Making…

Easter Eggs are an iconic symbol of the Spring holiday, Easter. They become decorations, a delicious snack, and we make an activity out of dying them. And we can’t leave out our Easter Egg hunt! My girls and I try to make pretty ones with flowers or polka dots. It’s fun to be creative. These Easter…

Does your child have a special book that she begs to read every day? Or fifty times a day? My five-year-old does! She loves our Muddle & Match books! She can flip through the pages creating a new character over and over again. It’s almost as good as watching crazy YouTube videos for her. Ok,…