You know those cheap little stamps that you can get in the birthday party aisle? The ones that rarely get used after the first day? Well, we found the perfect use for them! As part of the 21-day “Learn with Your Craft Stash” series, we wanted to use the stamps and ink that were already in our craft supplies to create a learning activity. Create a hands-on addition activity with those party aisle stamps and some number stamps too! 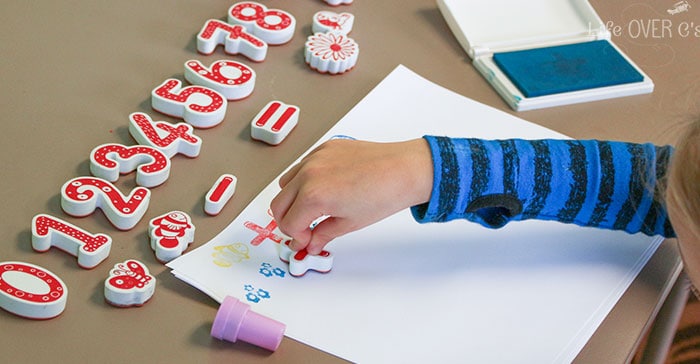 I told my first-grader to show me some math problems using the stamps. I demonstrated 1+1=2, so that she would understand what I was talking about.

After that it was all her. I told her to create problems until she ran out of space on the page, but she kept going after she filled up the first page.

I liked this activity because it made Jaida think about how a math fact is put together. She needed to think about where the symbols belong and that changing a symbol would change the outcome.

I was expecting her to just do addition problems, but she got bold with the subtraction symbol and tried out 2-2.

Plus, all she thought she was doing was playing with stamps, but in reality she was learning and expressing her knowledge in a new way.

It can be so easy to put a pencil to paper and write out the problems without really understanding the ‘why’ behind the problem, but using a hands-on activity like this sticks in her mind so much more!

Of course, with bigger kids you could have them show multiplication or division problems with just the numbers and some math symbol stamps.

Or with a smaller child, you could practice counting!

If you have missed any of the activities in the “Learn with Your Craft Stash” series you can find them all by clicking this picture:

Interactive Ten-Frames and number bonds for your whole class to enjoy! Students will get up and moving around with this life-size ten-frame set. They can work in partners or small groups to find sums and missing addends. MATERIALS NEEDED FOR THE TEN FRAME and NUMBER BOND LIFE-SIZE ACTIVITY STAR: Card Stock or Scrapbook Paper |…

Who loves swimming in the ocean? Even though I grew up land-locked in Iowa, I have loved the ocean since I set foot in it almost 20 years ago. Of course there is  sitting on the beach, enjoying the waves, collecting sea shells and maybe even finding sea weed along the shore. Going deeper, though,…

All around our house the fall decorations have been coming out. The first to arrive were the scarecrows on the front porch. Followed quickly by some fall sunflowers. I have always loved the brightness of the sunflowers and they, along with the scarecrows, were a great inspiration for the scarecrow word building printable that I’ve…

This activity is perfect for snack time! Your preschoolers can practice their counting skills while enjoying some popcorn! These free printable popcorn counting cards are a simple way to practice counting from 1-10 with a theme that almost all kids love! Materials needed for the Free Printable Popcorn Counting Cards: Paper and/or card stock POPCORN! Laminating…