One of our favorite things to do after a summer rain is to run to the balcony and try to find the rainbows. Because we have a panoramic view of the city, we can usually find a rainbow somewhere. And the kids usually jump, shout and clap their hands as if it will be the first and last rainbow. Ever. We’ve been rain free for a few days, but that didn’t stop us from making a rainbow anyway. Well, a textured rainbow sensory bin at least. *wink* 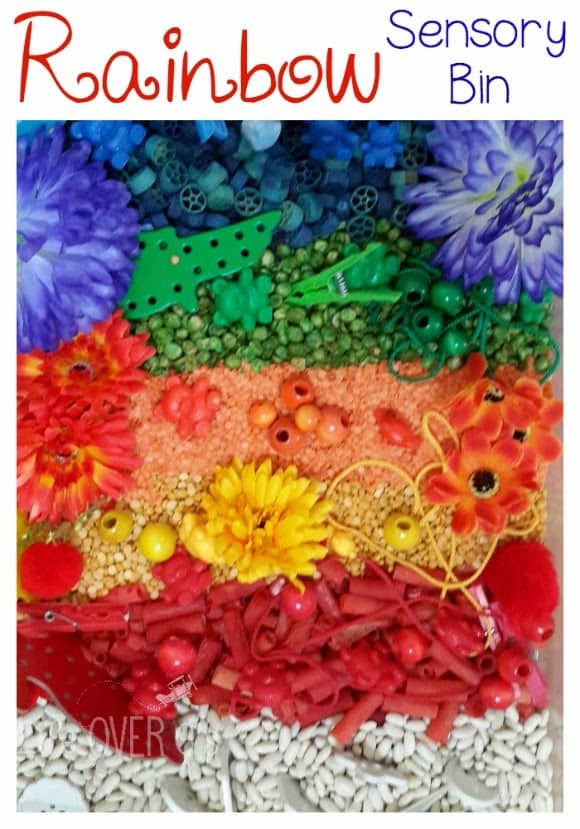 As with all of the sensory bins that I make this one is super easy to throw together. The red, white and blue sensory bin from last week? 3 minutes.
This textured rainbow sensory bin? 10 minutes. It actually only took so long, because we had to sort out the contents from the red, white and blue bin to reuse in the rainbow bin.
Because I’m a huge fan of reusing things.
The reason that I can throw them together so quickly is because I keep a good stock of materials on my craft shelves.
Dyed pasta
Dyed rice
Beans
Any lentil, grain or dry material from the pantry
Any of our preschool ‘toys’
I threw this bin together to keep the little kids occupied during my 11 year old daughter’s birthday party. Her theme was rainbows, so a rainbow sensory bin was a no-brainer.
Whether it was out of necessity because of what I had on hand or just because I’m totally awesome… I love the variety of textures that ended up in the bin.
You can scratch the “I’m totally awesome” idea because I didn’t plan it at all. And because when it came to rainbow making, I switched around the yellow & orange…hehe! 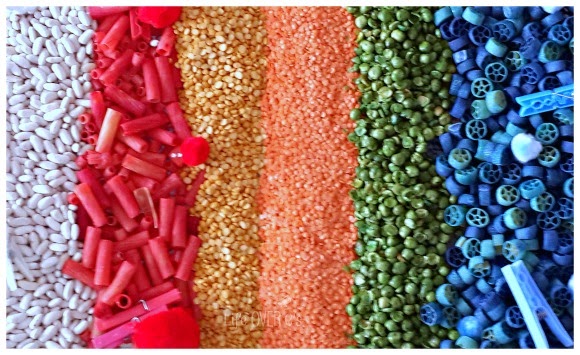 I told you I made it super fast. As in, people are coming up the elevator fast!
I simply pulled out a bunch of rainbow colored items from the craft shelves and pantry.
What I included:
white beans
red dyed pasta (penne and another round one)
yellow split peas
orange lentils
green baked peas (some sort of snack that’s been in my cupboards, but no one is eating)
blue dyed pasta wheels
Then, I rummaged through the craft shelves to see what else I could throw in.
I found beads, flowers, buttons, threading cards & strings, and rainbow pattern bears. 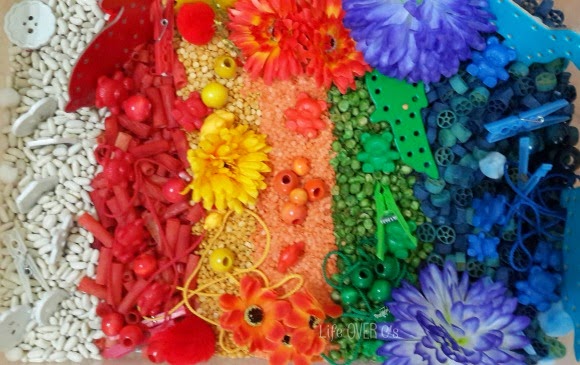 That was it. Simple, but it kept the little ones well entertained.

So well, that they didn’t want to share it with each other!
And as a testimony of its success, my 3 year old climbed up on my lap as I was writing this, saw the pictures and started begging to play with it again, so she’s doing that while I finish this!
If you want to make your own bin, there is no magic recipe. Just use what you have and have lots of rainbow sensory fun!

Check out some of the other sensory activities and free printables that we’ve used! 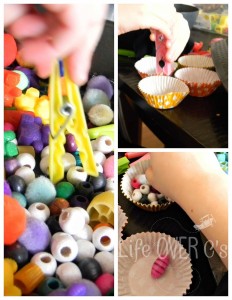 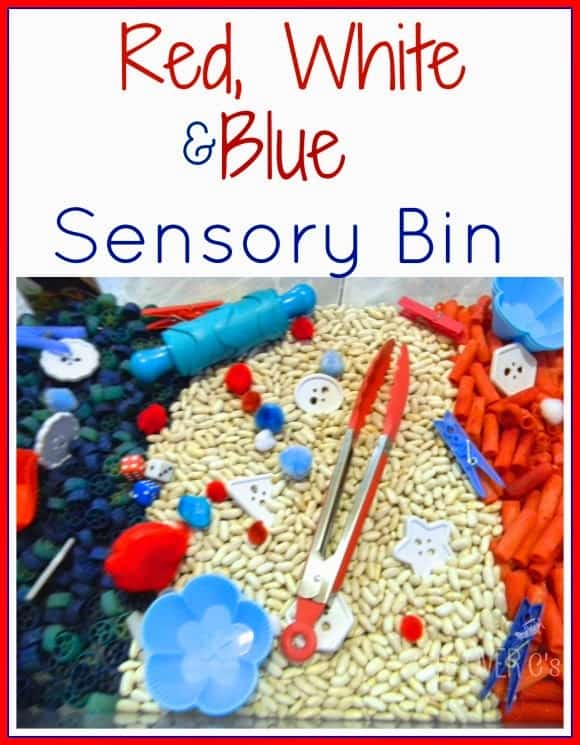 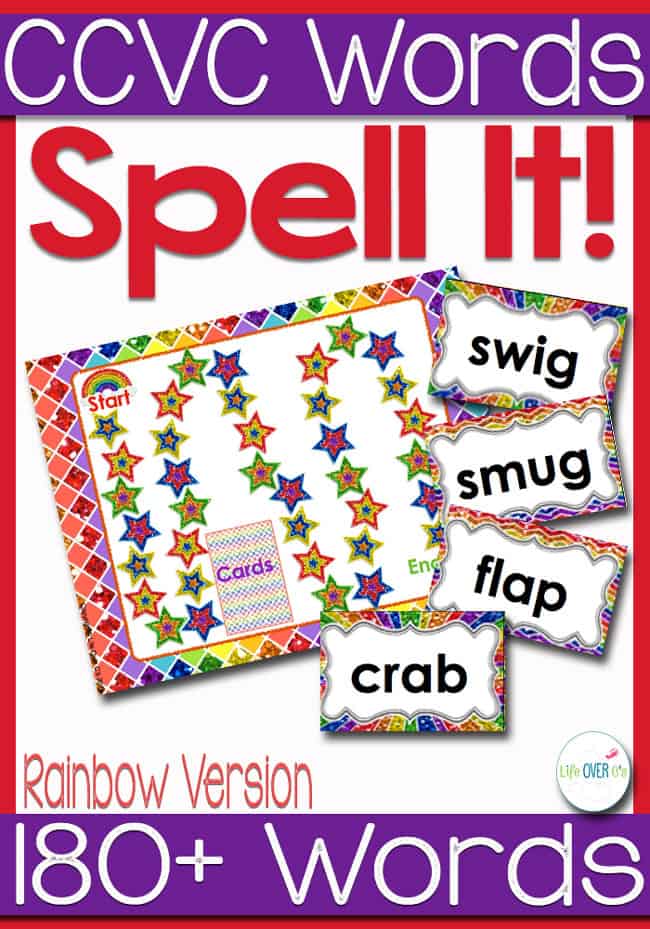 Get students sounding out initial blends and digraphs with short medial vowels with this fun spelling board game. Students will read and spell over 180 CCVC/CCCVCwords! This is a great way to get students reading! It is lots of fun in a great rainbow theme. MATERIALS NEEDED FOR THE COLOR RECOGNITION CARD GAMES: Card Stock or Scrapbook Paper…

St. Patrick’s Day is one of those holidays that didn’t really mean much until I had kids. Now I see it as a fabulous theme for learning activities, like our Gold Coin Counting Grids. (And a super awesome day because my youngest daughter was born on March 17th… )  We’ve included a bright colorful rainbow,…

We love going apple picking each fall. I’m still plotting and planning where we are going to go this year, but we have to do it! I made this free apple orchard I Spy to get us in the apple picking mood and the fun matching scavenger hunt for when we finally get to the… 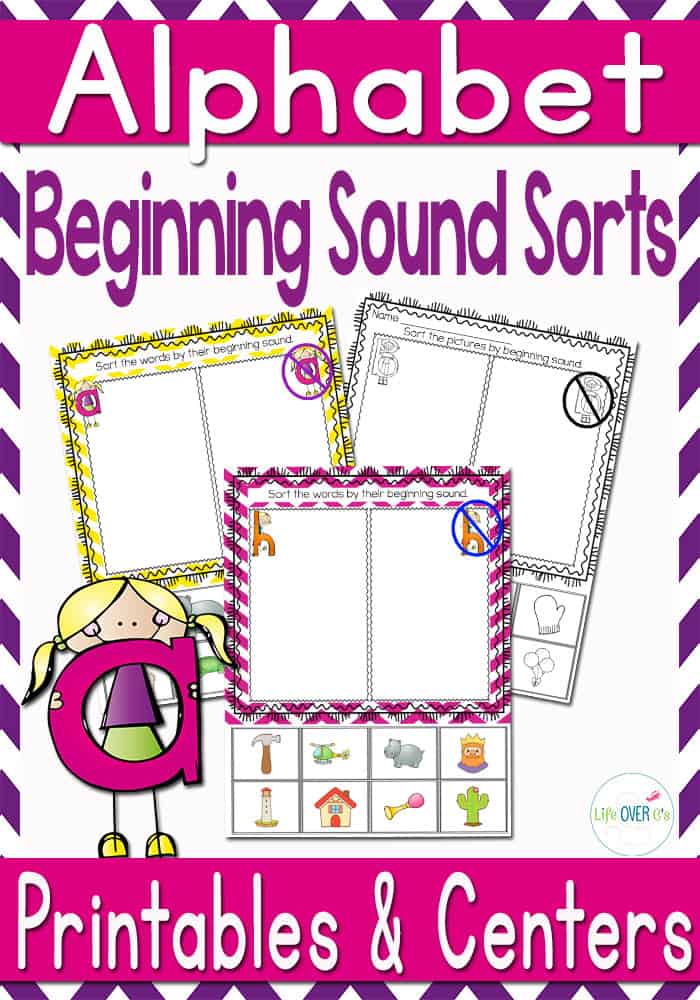 Students will have fun practicing their phonetic awareness skills with these fun alphabet sound sorts for beginning sounds! What’s included in the Alphabet Sound Sorts: Two versions for maximum versatility: Full Color or Black and White: Print & Go pages 26 Picture Sorts in both color and black and white. Activity Details: Print in color and laminate for a…

Who wants a cupcake?? All the kids will after working on this Valentine’s Day Cupcake Graphing activity! Save yourself some trouble and have some on hand. *wink* Seriously though, this cupcake graphing activity is super fun. And the adorable birds and their cupcakes are great math motivation! Your kids will love tossing the dice and…