This post contains affiliate links for your convenience. By clicking on these links I may earn a commission at no additional cost to you.
Spread the love

You may recall that back in February, we did a super fun activity with ten-frames and number bonds. Well, since we were in the mood for apples yesterday, I made an apple-themed ten-frame set to help us get back into the groove of doing school. 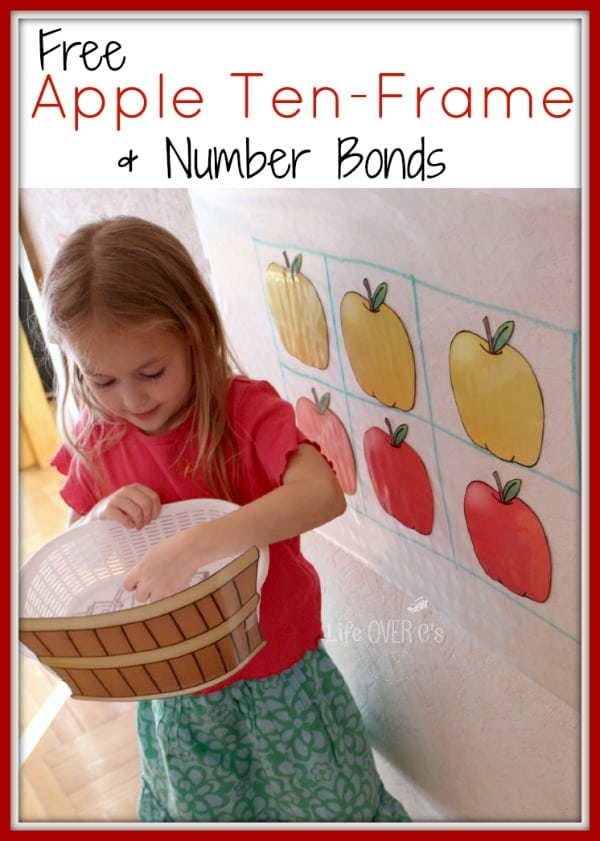 We originally planned to homeschool through the summer because we were going to move in November, but because of my youngest daughter’s medical needs we are moving at the beginning of September. That meant I was way too distracted to do school this summer. No biggie, but I don’t want us to totally lose the progress that we were finally making with Jaida, my very reluctant learner.

I was shocked a couple days ago when she asked if the next day was a school day. I told her, no, we’re taking a break. Then I asked if she missed doing school.

With a caveat of course.

She missed playing the games that we play during school, not the ‘boring stuff‘.

Which was a huge sigh of relief for me that I’m actually doing something right with her. She has never been one to want to sit in front of a workbook, black & white printable or anything of the sort. Her older sisters loved workbooks. (They don’t anymore, but they did…)

This has been a challenge, since so many of the school resources available are exactly like the things that she hates.

She is the reason that a little over a year ago I started creating and selling my own educational printables.

That’s why you won’t find a bunch of boring worksheets on my blog or in my shop. And why we use a lot of play dough…lol!

So back to the ten-frames.

Jaida loves numbers, but she doesn’t like sitting, so I created a ten-frame on our sticky wall. This time I went for lazy simple and drew the ten-frame using a dry erase marker (because I couldn’t find my permanent marker…). It’s not as pretty as the ribbon that we used last time, but it gets the job done.

Because you need to attach the apples to the sticky wall, they need to be laminated. You need to print 5 copies of each of the big apple pages to make 10 of each color.

Then, print the number bond cards on card stock or laminate them as well. I included a fun ‘bushel basket’ in this set that you can attach to a bowl, jar or whatever you have on hand to create an apple barrel. 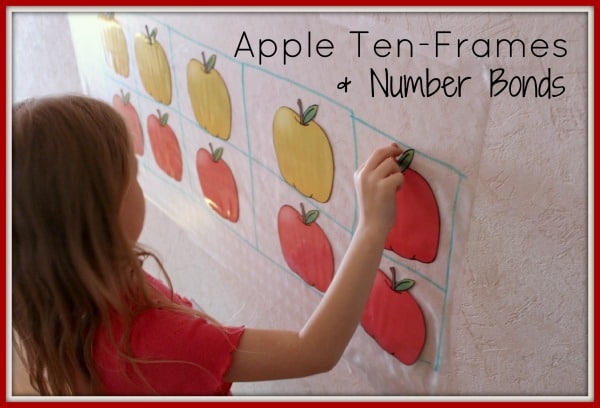 We had a lot of fun, but she’s such a ham that I had a hard time getting a real picture of her because she kept wanting to pose for the camera. (She also chose her own clothes, as she does every day!) 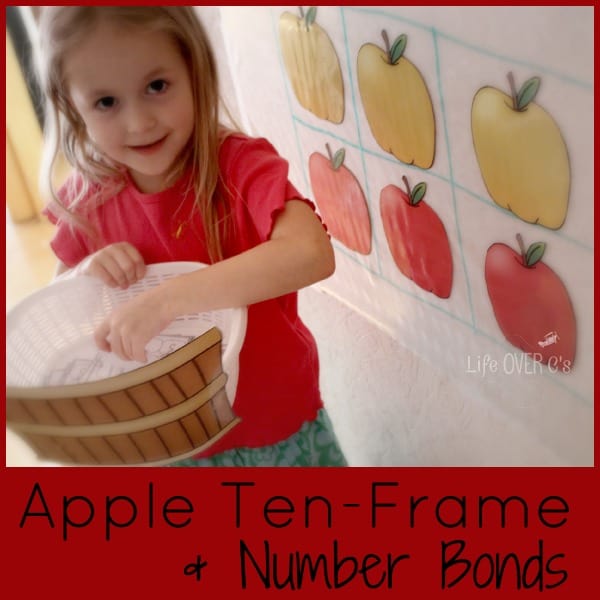