I gave you the sneak peak yesterday, but here’s our apple sensory bin in action! I think Shiloh was a bit excited by this one because I had it hidden under our living room daybed and she found it before I intended her to.

Thankfully, I had taken all the set-up pictures ahead of time! Because I didn’t even know she had it until I started hearing the rice ding against the little glass bowls.

She’s a sneaky one.

She also did not want to share. I think she got it out when her sisters were busy on purpose!

Later on when we did our alphabet trees with Jaida using the mixed up sensory bin, she was not keen on letting Jaida have a turn. In fact, she started trying to roll it away from her.

I think that means she liked it. *grin*

There were so many beautiful pictures of this that I had a hard time choosing which ones to share!

Materials we used for the Apple Sensory Bin:

Colored rice (3 cups each of red, green and yellow)

Shiloh focused very hard on pouring into the bowls, which was a new accomplishment for her. Usually she just throws everything together all over the bin.

No matter how many bins we do, I am absolutely amazed at the beauty of the color mixtures and the textures.

I hope that you will create your own apple-themed sensory bin this fall!

We love Fall! There are so many wonderful learning themes and opportunities for kids to do in this season! One of our favorite Fall themes is LEAVES! This Fall Leaves Alphabet Matching Activity is so simple and perfect for wiggly kids! Plus it uses one of our favorite materials for learning, craft foam! Continue reading…

Circle time is a big part of many preschool classrooms. Circle time is typically filled with reading stories, singing songs, and other whole group activities such as calendar. But managing a large group of young children comes with many challenges. Here are some of my best tips for a successful circle time in preschool! Picture Schedules… 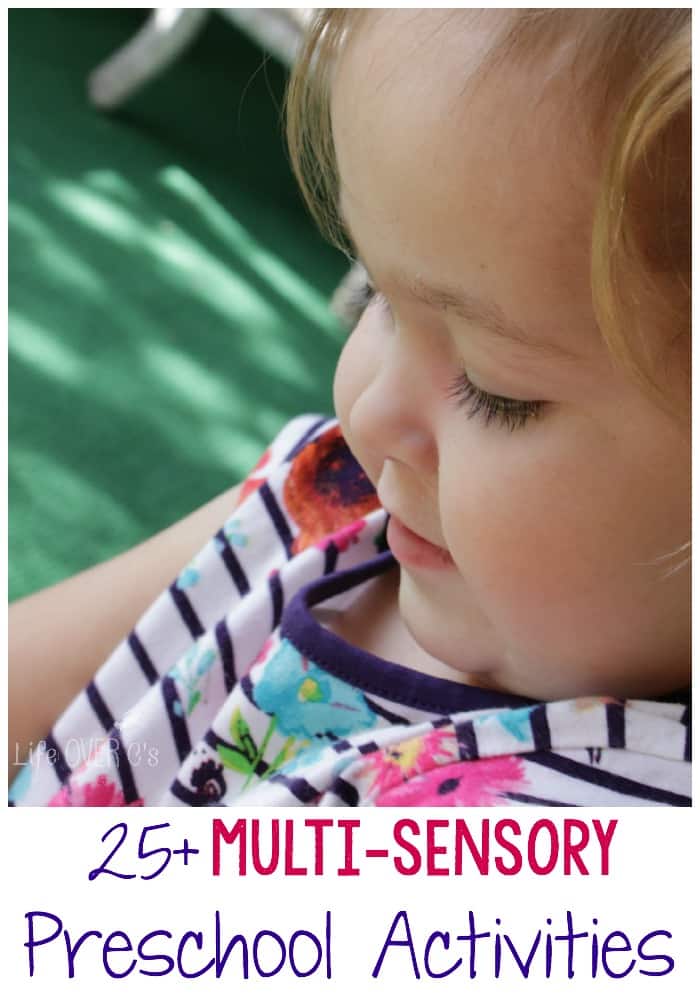 I love the preschool age! Kids are so curious and eager to interact! Even my special needs daughter loves doing ‘school’ while her older sisters are working. In fact at the moment, she has alphabet beads scattered all over the floor. Here is a fun collection of the hands-on preschool activities that we’ve been working…

Science doesn’t have to be complicated. The principles of science, including exploration, testing, and discovery all come naturally to preschoolers. Harness their power of curiosity and set up this super-fun density activity for your preschoolers. The kids will love diving into the science of density and will have a blast playing and learning in the…

A while back I asked my 9 year old to start at 2 and skip count by three’s. Her answer: “You can’t do that!” Face palm. Somehow, this little girl who was so good at math, had missed the concept of number patterns. Then, when we were playing with LEGO® a couple days ago, I…

Winter has set in for good, which means that there is nothing but snow and ice for the next 2-3 months. You can make this part of the year exciting by bringing some of the elements of winter into the classroom. This snowman fine motor activity is a fun way for kids to strengthen fine…